by Boobs of DOOM 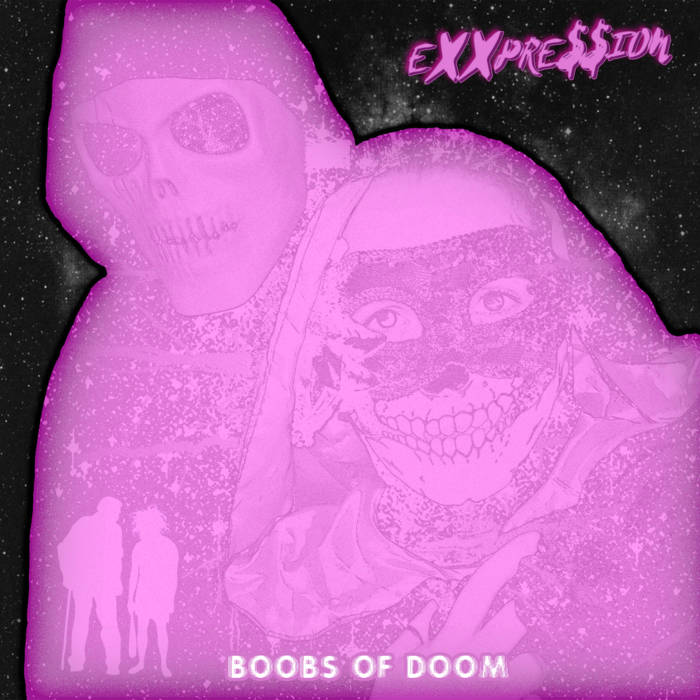 Zontar the Thing in Swissvale

LIFE: That awkward moment between birth and Ddeath;
MODERN LIFE: Largely wading around, up to our hips,
in the sisyphean pigswill of human folly;
all you can hope is that some GALLUS BASTARDS
will give it stir every now and then and at least keep things interesting,
no?;
B00BS 0V D00M
are those
GALLUS BASTARDS

"The music on this album is strange, but immersive, electronic but doomy... There are some brilliant tunes to be found here. If you're into bands like Black Dice, Scorn, Kompressor and so on, you need this album."
- www.merchantsofair.com

"doomy but lots of fun... this is some seriously mucked up music, a massive bass riff supported by some noises which sound like the BBC Radiophonic Workshop's just had a severe meltdown. BM truly does fear for Dr Who and the rest with this lot... very impressive and clearly all the better for being the products of diseased minds."
- www.facebook.com/bettymayonnaiseofficial

"...the mix of the contemporaneous beats with nods back to the pioneers of electronic music and all wrapped up in a fog of pessimism bordering on the sepulchral at times. It's not for everyone I know, but anyone with a liking for experimental music or those bored with the current state of electronic music (IDM be damned!) will get a great deal from this."
- dayzofpurpleandorange.blogspot.co.uk

"eXXpre$$ion is, dare I say it, the sexiest album these guys have made yet. This album has a lot more subtlety and is less harsh then their previous outings, dare I say it’s even pretty catchy at times? There are some dub vibes, some nice synths that weave spellbinding rhythms throughout, but it’s all still coated in a classic apocalyptic layer, courtesy of Boobs Of Doom. Because if I have to name one thing that connects all their releases, it’s the way these songs feel, the way they crawl forth through the desolate landscape they created. It’s lovely, haunting, and scary, all at the same time."
- totallybiased.be

"The glitchy distortions of their compositions give the music a foreboding vision of the future through which a deep bass-line grinds as though destroying everything in its path while sparking arcs of electronics shatter leaving a sense of wanton destruction and industrial wasteland left in their trail."
- emergingindiebands.com

"‘eXXpre$$ion’ is the band’s tenth album, and is a rich mixture of urban beats, drones and industrial sounds… all of which come together into a marvellously cranky and freakish mélange that (strangely maybe) reminded me of the later work of two members of Pop Will Eat Itself. It has the complex wackiness of Richard Marsh’s Bentley Rhythm Ace and the sheer darkness of some of Clint Mansell’s work, most notably for me the ‘Requiem for a Dream’ soundtrack."
- psychinsightmusic.com

" If WOW is Dead was Boobs of Doom's Downward Spiral, eXXpre$$ion is their Ghosts. Their last release featured a wider range and darker tone than ever before, but this one brings a higher consistency and increased replayability than anything else they have created thus far... Listening to eXXpre$$ion makes me want to put on dark sunglasses and a leather jacket. I feel like a badass who doesn't feel the need to tell people he's a badass. Cigarettes don't make you look cool...Boobs of Doom is what's in this summer."
- metaltrenches.com

"...soundtracking everyday doom and possibly the aftermath of an explosion in an abbatoir. BM’s particular faves are the closer ‘You May Kill Just Like A Woman But You Preach Just Like A Little Girl’, which starts with sub-bass noise and builds into a fiasco of guitar and other odd utterances. The ten minute ‘Friend Collectors’ could be Mogwai from hell, if they weren’t halfway to hell already, good grief – pastoral but eldrich… The electronic beats and filtered feedback gives a weird out of body trip-hop experience, like Massive Attack after a large heart attack…"
- www.isthismusic.com

"These Boobs of Doom don’t come across as very nice and don’t think they love you the slightest bit; they probably hate my and your guts, but that’s that special kind of thing that makes this release so good: B00BS 0F D00M don’t give a fuck! And why should they? Aren’t they the freaking best? Besides that attitude really opens them up to provide a completely new kind of music, something unlike anything else on the market. Amazingly atmospheric, trip-worthy, groovy, strange and hypnotic in the darkest sense of the word."
- yeahiknowitsucks.wordpress.com

This one is for Biffy, the original Hashcat.

Bandcamp Daily  your guide to the world of Bandcamp

Featured sounds from Fly Lo and Ahmed Idris, plus Mother Nature hops on to drop off new project